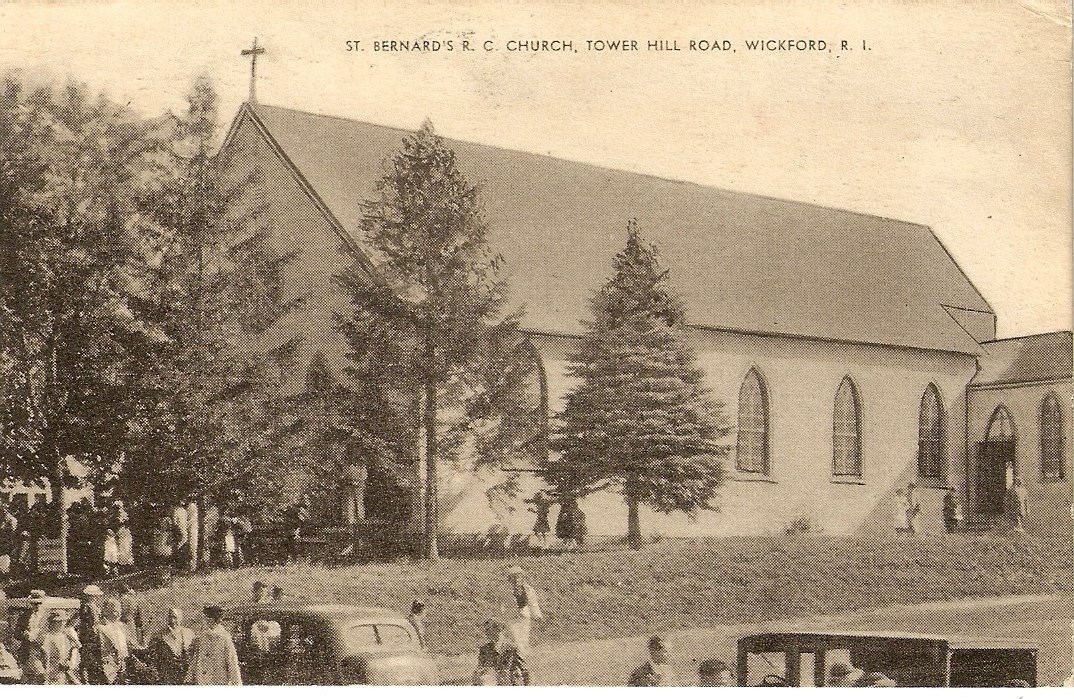 Saint Bernard Roman Catholic Church, located in Wickford, Rhode Island, was established in 1874 thanks to the initiative of Reverend William Halligan, pastor of the Church of the Holy Name of Jesus in East Greenwich, which is now known as Our Lady of Mercy. Fr. Halligan often travelled to Wickford to celebrate Mass in the homes of residents since there was no church nearby. The Catholic population in North Kingstown gradually increased as French-Canadian and Irish immigrants settled in the area to work in the mills and factories. In 1874, realizing that there was now a big enough Catholic community to support a church, Fr. Halligan purchased a half acre of land for the construction of what became St. Bernard Church.  The Church was dedicated by Bishop Thomas F. Hendricken, the first bishop of the Diocese of Providence, on July 4, 1875.

At this time, the entirety of North Kingstown was in the boundaries of the parish. In 1904, Bishop Matthew Harkins appointed Reverend John H. McKenna as the first resident pastor in 1904. He enhanced the church property by initiating the construction of the rectory, installing electric lights in the church, and setting a place for horse and carriage sheds. The next pastor to be assigned was Joseph P. Gibbons who was appointed by Bishop Harkins in 1915. He added a sacristy and a place for baptisms in the church, which also helped to accommodate the many people who went to the church during the summer. He also added a front porch, which later became the vestibule. Since he was the first pastor to own an automobile, a driveway was installed to replace the horse and carriage sheds.

The succeeding pastors oversaw many new developments including the installation of oil-burners by Reverend James P. Tiernan and the building of the church hall in the 1930’s by Reverend John L. Cooney. Since the parish was founded, many of the pastors relied on the parish lawn parties, fairs, plays, festivals, harvest suppers, and bake sales to raise money for such projects. Also from the beginning, the parish was spiritually supported by various Dominican friars from Providence College who came to celebrate Mass and meet the spiritual needs of the ever growing number of parishioners. Providence College still sends some of its friars to St. Bernard’s parish to the present day.

A parochial school was opened in 1950 under the direction of Reverend Cornelius Collins. Several members of the faculty included nuns from the Sisters of the Cross and Passion, who began residing in the house next to the school when it first opened. Rising operational costs forced the next pastor, Reverend Joseph M. Degnan to close the school in 1970 and many of the sisters left the area, though a few remain active in the life of the parish today.

In 1969, North Kingstown was divided into two parishes as St. Francis de Sales Parish was established to serve the northern half of the town. At the time each parish served approximately 700 families. This division alleviated the work of Saint Bernard Church allowed the diocese to better meet the spiritual needs of the people of North Kingstown. The Reverend Charles E. Fountain was appointed to succeed Fr. Degnan as pastor in 1971. He re-opened the parish hall, organized a band known as the St. Bernard Braves Drum and Bugle Corps, which won many awards for performances at various parades, and he also formed a Social Club as well as many youth programs in the parish. Fr. Fountain also expanded the size of the church to accommodate the growing town population.

When Fr. Fountain’s health began to decline in 1985, Reverend Robert F. Caul was assigned as a temporary administrator of the parish until 1987 when Bishop Louis E. Gelineau assigned Reverend Frederick J. Halloran as the next pastor. One of Fr. Halloran’s most significant projects was to do a complete renovation of the church hall, which eventually became known as the “Father Halloran Hall.” It was also under Fr. Halloran’s direction that the parish scholarship fund was established, which continues today to help many young people in the parish to continue their education. The Reverend Gerard O. Sabourin then became pastor in 1993. During his time as pastor, lay ministers of the Holy Eucharist were assigned to visit the sick in different communities of the parish each week, and the old school building was converted into a Parish Center.

Reverend Dennis A. Reardon became the pastor of St. Bernard Parish in 1999, and he was faced with a difficult decision. After the Station Nightclub fire in West Warwick in 2003 resulted in stricter building safety regulations, the parish was forced to meet the new building code, which came at a cost of $1.3 million. Two years before, a woman by the name of Virginia Davis passed away and left her farm house and her land, which was located approximately 0.3 miles away from St. Bernard Church, to the Diocese of Providence as an inheritance. Instead of making the changes to the building, the parish decided with the approval of the diocese to build a new church on the land given by Davis. The old church property was sold and converted into subsidized housing for the elderly, and a capital campaign was begun to build the new church at the corner of Tower Hill Road and Ten Rod Road where it stands today. This new church was dedicated by Bishop Thomas Tobin on August 15, 2009.

In 2010, the current pastor, Fr. John Unsworth was assigned to St. Bernard’s. He made major renovations to the rectory, which was formally Davis’ farm house. During his time as pastor, a new capital campaign was initiated to raise money for a new parish center, which officially opened on February 1, 2016, and was dedicated by Bishop Tobin two months later. The parish now has a large space that can host different events within the parish and the larger community. The construction of a memorial garden behind the church and a victory garden that will provide food to be donated to Emmanuel House, which serves the homeless in Providence, are also planned for the future.

Though it has experienced much adversity and challenges over the years, St. Bernard’s has thrived as a Roman Catholic parish community in the Diocese of Providence, and continues today to be a beacon that spreads the joy of the Gospel to the people of North Kingstown and beyond for many years to come.