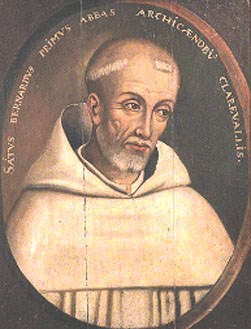 Who was this great saint our Parish is named for and whose feast we celebrate each year on August 20th?   St. Bernard was born in 1090 AD, the third son of Tescelin Sorrel, who was a wealthy nobleman who lived in a castle near Dijon, France. He was one of seven children and, after having received the best education offered to children of noble birth at that time he was sent to study civil law. At the same time, some Benedictine monks were establishing new monasteries which called for a strict form of poverty and simplicity after the example of St. Benedict. They called themselves “Cistercians” and their monasteries exist even to this day, and they continue to thrive.

St. Bernard left the comforts of his privileged life and followed them as they established their first house (Monastery) near Champagne, in a valley called “Wormwood”. They lived through a period of extreme hardship. The land was poor and they had only barley bread and boiled beech leaves to eat. Many of the monks became discouraged, but St. Bernard, as they say, “loved it”, and he became an inspiration to both the abbot and the monks of how to make the best out of a difficult situation. Eventually they changed the name of the valley from “Wormwood” to “Clairvaux” which in French means “a clear view of the sun”. Some years later his father, now widowed and two of his brothers joined and became monks as well. Soon Bernard was the Abbot.

In Ireland, at that time, a new Cistercian monastery was founded by St. Malachy. He met Bernard in Rome where Bernard has been summoned by Pope Innocent I to help settle a dispute over the last papal election. They became life-long friends and Malachy sent a young Irish monk to study under St. Bernard so that the Irish monks could study the writings of his friend Bernard.

During his lifetime, St. Bernard was called away from his monastic life (usually against his will) to deal with great issues facing the Church. He traveled on behalf of the Pope preaching against heresies and he preached inspiring sermons to young soldiers going off to fight the Crusades. He met with kings and princes to settle disputes and to aid them in gathering funds to help support the Crusades in the Holy Land.

Early in 1153 St. Bernard, who was already very ill and weak was asked to travel to the city of Metz (near Trier) in Germany where the archbishop asked him to come settle a dispute between the towns people and the duke of Larraine, who had been attacking the city. St. Bernard forgot about his own infirmity and he prevailed upon both sides to lay aside their weapons and accept a treaty which he himself had drawn up. He died that year on August 20th at the age of 63. At the time of his death he had been the Abbot of the Monastery of Clairveau for about 38 years and he had founded 68 monasteries around Europe. He was canonized a saint in 1174 and in 1830 was named a Doctor of the Church. Because of his inspiring writings, his eloquent way with words and the magnificent hymns he wrote in honor of the Blessed Virgin Mary, he is often referred to as “The Honey-Sweet Doctor”. Because of this title he was later named the Patron Saint of bee-keepers. (And that is why the altar of our church is shaped like a bee hive.)